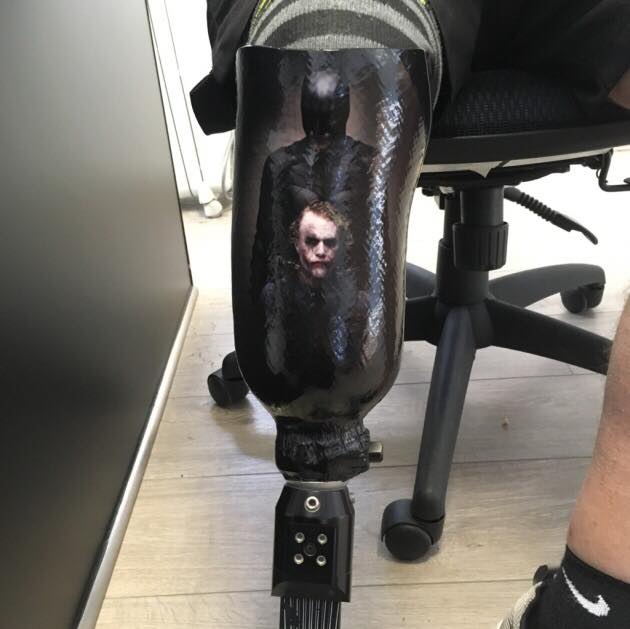 We have spoken with Cara at Nanotech who are AMAZING and she says anyone keen to take up their offer of a free vinyl for their prosthetic please email Cara on Contact@nanotechpristine.co.uk or phone 01473 527447

The below information in this blog was taken from an Article in Ipswich Star: http://www.ipswichstar.co.uk/news/ipswich-garage-to-offer-free-designs-on-prosthetic-limbs-1-5747125

Nanotech Pristine in Princes Street is providing a free vinyl wrap service to decorate prosthetic limbs and wheelchairs for the rest of the year.

The idea was introduced to them by local man Chris Winder – who has had a prosthetic leg for the last five years.

Mr Winder, who lost his leg after an injury while playing football which then led to an infection, approached the car repair shop with the idea after seeing his inspiration Mark Ormond with a vinyl design.

He said: “When I saw Mark’s arm I thought I want this done too and I asked around and was led to Nanotech Pristine.

“When I came into the shop and asked about it their faces lit up at the thought of this new challenge.”

The whole process took seven days to design and create and would normally cost roughly £75 – but the company did not charge the 53-year-old anything.

“He is a very likeable character, and we just wanted to do something nice.

“Offering the service free is a way for us to give back to the community, and seeing how happy it made him and what it meant to him we wanted to offer it to everyone. It doesn’t cost us that much and we are happy to give it away.”

The company will complete all requests for free until the end of the year.

Bosses say the service will continue into 2019, and they are determined to make it as cheap as possible.

Father-of-three Mr Winder was taken aback when he heard they were prepared to do his design for free.

He said: “When you meet people who are generous and do things for you when they don’t even know you, you can’t believe it.

“They have a heart of gold, I was a bit emotional I had just met these guys and they were willing to do this for me.

“Hearing that they would do it for nothing, I said to them make use of me, whatever you want to do to get the message out about what you are doing you can use me.”

Chris is thrilled with the design he said: “I am really happy with it, my kids and ex-wife love it and wanted to know how it was done.

“They all knew it would be Batman but yeah they were really impressed with it.

It was the first time graphic designer Edmundas Martinkus had created a design for a limb.

The 27-year-old said: “To do this on his leg was nice, it is the first time for me, it was different.

“It was good as he came with his idea and it was easy for me.

“I am looking forward to doing more I think it is a nice idea.

He added: “As soon as our boss heard there wasn’t really a service for it he just wanted to do it for free of charge.”