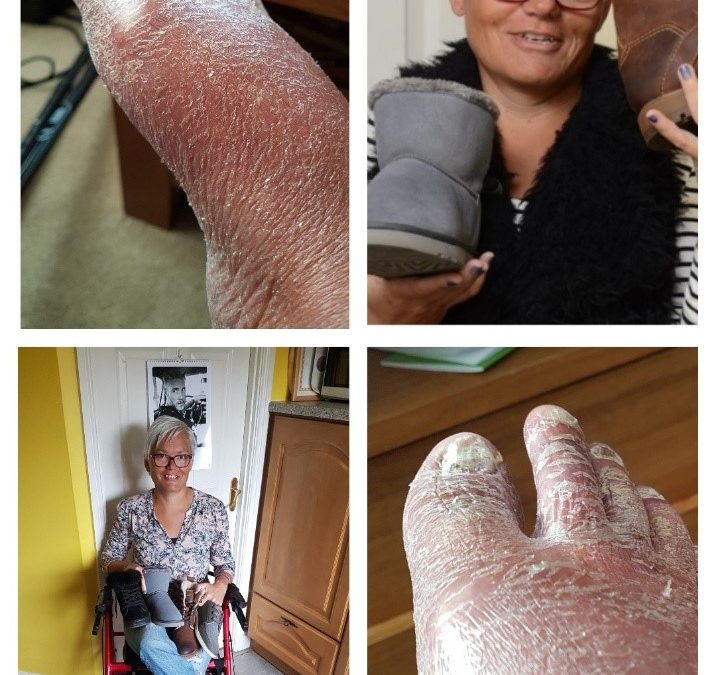 Hi my names Jo, I’m a married Mum of two grown up boys and for those of you that don’t know my story I woke up one day in February 2003 numb down my right hand side. After spending 2 weeks in hospital and having lots of tests done I was sent home with the label ‘undiagnosed neurological disorder’.

Over the next 10 years my symptoms seemed to get worse on a daily basis.  Headaches, tremors, contracture of my hand and pain .. pain like I had never felt before!

I had been told that I had dystonia which had caused the contracture in my hand and then had done the same to my foot but still had no clinical diagnosis for what was causing everything.

We were now 10 years down the line and the pain was SO bad. We had tried everything from Nerve Blocks to Ketamine Infusions.

One day I opened a letter from my Neurologist & reading through it he mentioned the fact that I had CRPS … What the??? No one had told me this, what was CRPS?

So it turns out that after 10 years of no diagnosis I had a label at last.

I didn’t ask for this in my life, I don’t know why or how I got it but tough I’ve got to live with it.

Once I had the diagnosis I was able to do some research into what has helped people before me and there were 2 specific things, spinal cord stimulation and rehabilitation at a specialist hospital in Bath.

In October 2017 I had the Spinal Cord Stimulator inserted and in 2018 I had three 2 week stays in Bath where we had workshops on things like relaxation, painkillers, sleep, pacing and psychology.

At the beginning of 2017 I had got the stage where I could no longer wear anything on my foot because the pain was so bad that I couldn’t bear anything to touch it (alloydnia), so with this and the dystonia I was down to only wearing one shoe.

It dawned on me one day that surely I couldn’t be the only person wearing one shoe and that someone might want the pile of odd shoes that was slowly building up in the bottom of my wardrobe.

I took the bull by the horns and set up a Facebook group inviting a few CRPS sufferers that I had come across in the same situation as me and thought we could swap shoes with someone the same size as us. Unbelievably the group just took straight off, thanks to media coverage and of course social media.  We were then being offered shoes by shoe shops and distributors, to give to the members. So instead of a swap group it was more of a donation group.

I was getting thanks come through from people who had only had 1 or 2 shoes because they couldn’t afford to buy a pair only to throw one away.  We don’t charge for the shoes so as long as they pay postage and packaging they can get up to four new shoes in a parcel.

The group had got so big now and I had so many shoes, at one stage timberland sent me 32 massive bag fulls, that I decided I needed help. A couple of willing members came along to help me with the admin side of things and they also store shoes at their houses. We have shoes being distributed from Kent, Devon and  Gloucestershire & they are being sent from Ireland to Scotland and of course all over England.

The group has given me a real boost and when people say “what you do is amazing” the answer is simple “I do it because I love it”.

Although my mental health was fantastic because of the shoes my physical heath was still deteriorating and I had been considerating amputation for a long time.  I finally found a surgeon who was prepared to do the operation for me in June 18, she understood that I knew the pain wasn’t going to go away but the alloydnia and dystonia would.

On 6 November 2018 ‘Stig The Stump’ was born and I can quite happily say I’ve not looked back. Is my pain better? No its probably worse. Is my mobility better? No it’s definitely worse. How do I feel? ABSOLUTELY FANTASTIC, I’m not frightened of people coming near my leg anymore, I got into bed for the first time in a couple of years, I had a pain free shower and the list goes on ….