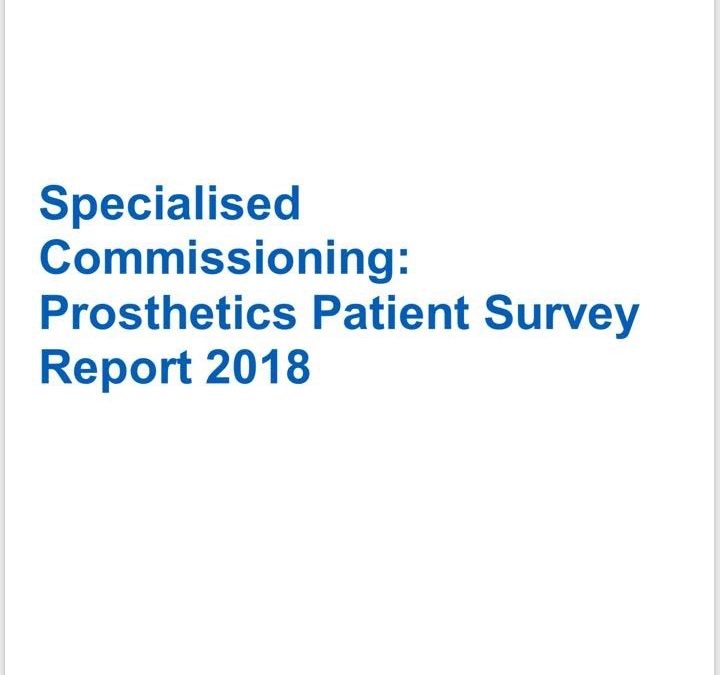 NHS prosthetics services in England are organised and paid for by Specialised Commissioning at NHS England, which covers upper and lower limb prosthetic care.  As part of a review into how these services are commissioned, NHS England invited all patients and carers to take part in a survey from August to October 2018, in order to share their views about how services are working for them and where they feel improvements could be made.

Thank you to everyone who took the time to share their views. There was a fantastic response to the survey, with over 850 people giving their feedback either on the online survey or by completing the paper version, and we are now attaching a report outlining some of the key messages that we heard. We received some very detailed responses and specific issues raised through the survey, not all of which are described in detail in the report as this is an attempt to sum up the common themes.

While the majority of people were happy with the care they receive, around a quarter of patients expressed some dissatisfaction with their care. We heard some very positive feedback about dedicated, compassionate and experienced staff. However it was really clear from the feedback received, that one of the main things people want to see is more clarity and fairness around what is available from NHS services. People reported different experiences of care, and varying access to specific limbs and other equipment which were described as a ‘postcode lottery’ by some.  One of the biggest issues for people was getting a comfortable and timely socket fit, with people expressing frustration that this isn’t always something that we ‘get right first time’.

Some of the comments received were more specifically about issues people had with their centre, such as how easy it is to make appointments, commenting on run down facilities or transport problems.

We believe that many of the concerns raised will be addressed through the review, which aims to ensure that services are properly funded with money ‘following the patient’, and to clarify what patients of prosthetics services can expect from the NHS.

Clinicians will be meeting up in the new year to discuss revising the existing service specification and clinical model, taking account of what we’ve heard from patients. Some of the changes required will take some time to realise, as we will need a totally different approach to the way services are paid for, and we would not want to rush into plans that could destabilise services or disrupt patient care. Please bear with us as we will be working on this over the next few months and we expect to be able to give a clearer idea of next steps later in the spring.

If this message has been forwarded to you, and you would like to receive updates directly, you need to sign up as a registered stakeholder so that we know that you are happy for us to have your contact details. Please register for the Rehabilitation & Disability CRG (clinical reference group) that falls under the Trauma Programme of Care.