Get Inked For Steel Bones 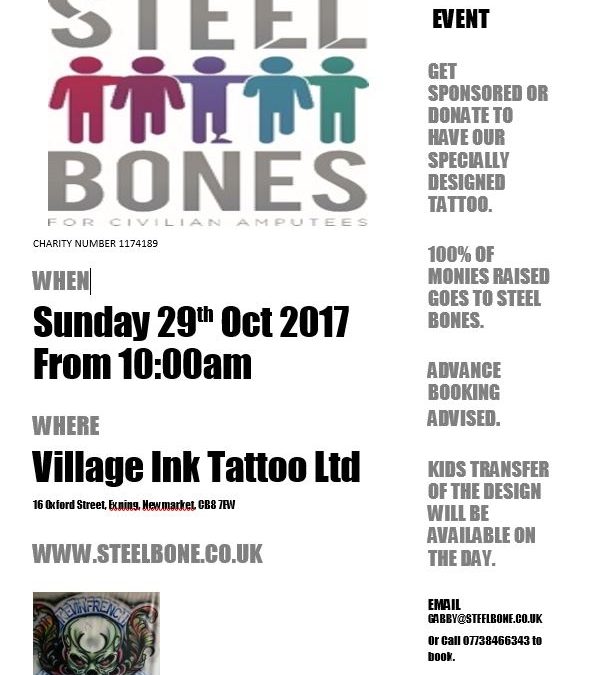 Steel Bones has been kindly given the chance organise a tattoo fundraising event. This will be held at Village Ink in Exning, nr Newmarket, Suffolk on 29th October 2017.

The idea is that people get sponsored or donate to have the design that has been specially drawn for us by Mr Kevin French owner of Village Ink, who is donating his time and all products towards the event. Thus, meaning 100 percent of monies raised will go to Steel Bones.

The idea came about whilst Gabby one of our trustees, was chatting to Kevin, they were discussing Steel Bones and a way of getting our message out there, Kevin suggested a simple tattoo that would be designed to make people wonder what it was and have to ask about it. Thus, raising awareness for Steel Bones and amputees.

When asked Gabby had to say: It was just a little idea we had and have been overwhelmed with the interest and uptake we have received. We are extremely grateful to Kevin for his time and the design, and are excited to have such a fresh fundraising approach to provide much needed funds to help more amputee families.

When asked Kevin had to say; I have known Jorja and her family for many years, and have watched Jorja grow in to an amazing inspirational person. Anything I can do to help Jorja and the charity she helped create, is my pleasure.

We also our pleased to announce that we have been chosen as a charity for the annual Halloween disco held in Isleham by miss B King and friends, tickets for the disco are available to book before the event or on the evening of 28th October 2017 from 7.30pm at The Beeches Isleham. This is the night before the tattoo event so anyone who wishes to join in the fun can make a real weekend of it.

Please see below a little about our charity.

Steel Bones is a new charity which came about, after the realization of a big need for on going support for amputees and their families. It started with a chance meeting between Emma Joy-Staines, her children and Gabrielle Furze and her children down Isleham rec one day. Jorja, Gabrielle’s oldest child is an amputee from birth. Emma said her children had never met another amputee before and that her husband Leigh Joy-Staines was an amputee too.  We got chatting and both agreed there is no one who had made us feel that we were not alone. We all agreed that there must be other amputee families who felt as lonely and lost as we all did.

Emma and her Husband came up with the idea of the charity after discussing how Jorja had said it would be nice to see more amputees having fun with their families.  Leigh lost his leg 8 years ago due to an operation going horribly wrong. Jorja was born without her lower leg as she was born with amniotic band syndrome. Both have since gone on to have numerous operations, and both families have found it very difficult to find support groups or other friends in such situations. It is quite a lonesome Disability and there is a lack of understanding in the general public and government as to what amputation means for an individual and a family. Hence, we have formed STEEL BONES with the help of a fantastic group of friends most of whom now form part of our Trustees.

STEEL BONES are a charity which works to connect the amputee community to give latest news on stump health, promote healthy and active lifestyle, signpost useful services, therapists, personal trainers, sports clubs and provide flexible careers opportunities. Our focus is on the entire family.

We are very passionate about supporting families and so one of our most important goals is to release a series of children’s books featuring amputees in normal, everyday situations.  We shall be working with children who are amputees themselves to create these.  Jorja Furze is our Young Person’s Ambassador who is helping us finalise these plans with her school supporting and fundraising too.  Jorja was awarded the title of this year’s child of achievement at the Ely Hero Awards. She is very humble for this fantastic achievement saying, “I really don’t understand why I received this, I’m just me.” But not only has she helped with the set up of Steel Bones, she has also started a group at school for children with anxieties as well as just trying to help others with what ever they need. Regardless of the fact she has been recovering from 2 major operations in the last year with another to come in October.

Another major goal we have been receiving huge demand for is STEEL BONES packs. We want to ensure every vascular and orthopaedic ward has an Informative, proactive and inspiring pack which every new amputee is given:  written by amputees for amputees.