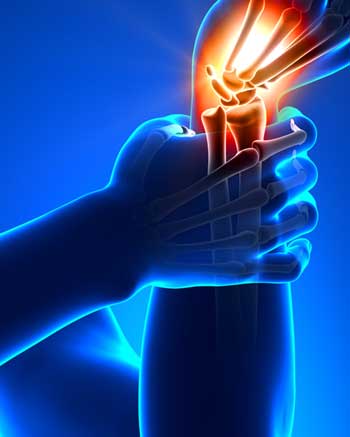 Phantom limb pain (PLP) refers to ongoing painful sensations that seem to be coming from the part of the limb that is no longer there. The limb is gone, but the pain is real.

The onset of this pain most often occurs soon after surgery. It can feel like a variety of things, such as burning, twisting, itching or pressure. It is often felt in fingers or toes. It is believed that nearly 80 percent of the amputee population worldwide has experienced this kind of pain.
The length of time this pain lasts differs from person to person. It can last from seconds to minutes, to hours, to days. For most people, PLP diminishes in both frequency and duration during the first six months, but many continue to experience some level of these sensations for years.
People are often reluctant to tell anyone that they are experiencing PLP or phantom limb sensations, for fear that they will be considered “crazy.” However, it is important to report these pains as soon as you begin to experience them so treatment can be started.

What Causes Phantom Limb Pain?
Unlike pain that is caused by trauma directly to a limb, PLP is thought to be caused by mixed signals from your brain or spinal cord. This is an important concept to consider, because the treatment for this pain has differences from the treatment you would receive for other kinds of pain. New therapies for PLP all involve trying to change the signals from your brain or spinal cord.
As with any other kind of pain, you may find that certain activities or conditions will trigger PLP. Some of these triggers might include:
Touch
Urination or defecation
Sexual intercourse
Angina
Cigarette smoking
Changes in barometric pressure
Herpes zoster
Exposure to cold.
If you notice any particular thing triggering an episode of PLP for you, let your healthcare provider know. Some triggers can be avoided – for example, you can prevent constipation or stop smoking. For other triggers, you will just have to understand and treat accordingly. You will not be able to prevent the barometric pressure from changing, but you will be able to understand that your PLP might be more severe on days with big shifts in the weather!
People are often reluctant to tell anyone that they are experiencing PLP or phantom limb sensations, for fear that they will be considered “crazy.” However, it is important to report these pains as soon as you begin to experience them so treatment can be started.
Treating Phantom Limb Pain
Treating PLP effectively takes a multipronged approach. Medications of several different categories in combination with non-medication treatments seem to be most effective. This combination of medication/non-medication is similar to treating other painful conditions.
For instance, if you broke your leg, you would expect to take narcotic pain medication, at least for a while. You would also elevate your leg and put ice on it.  For PLP pain management, you will take medications directed specifically toward interrupting the pain signals in your brain or spinal cord as well as using certain non-medication therapies, which also work on your brain’s interpretation of these signals.

Medications for Phantom Limb Pain
There are many different categories of medications that can decrease your pain. Each of them is thought to work on different kinds of pain sensations. The categories of some of the medications you might be given include:
Acetaminophen and non-steroidal anti-inflammatory drugs (NSAIDs)
Opioids (narcotic pain medications)
Antidepressants
Anticonvulsants
Beta-blockers
Muscle relaxants.

Some of these medications work best if taken in combination with other medications and if given at certain times of the day. The antidepressants typically used work best if given at bedtime, and are often taken at the same time as the anticonvulsants. Finding the right medications – with the fewest side effects – will require you and your healthcare provider to work closely together.
Non-Medication Treatments for Phantom Limb Pain
Alternative/complementary therapies can be helpful for the reduction of PLP. These include:
Acupuncture
Massage of the residual limb
Use of a shrinker
Repositioning of the residual limb by propping on a pillow or cushion
Mirror box therapy
Biofeedback
TENS (transcutaneous electrical nerve stimulation)
Virtual reality therapy
Imagery
Music.

Here’s some thoughts from fellow amputees on how they manage phantom pain:

Yeah in the early days it’s about meds to reduce what pain you can. This is good for the brain signals. Find a balance of rest and activity. The iWalk helped me up on my feet 10 days post op mixed with rest and wheelchair find that balance of keeping a small bit active and getting some air whilst resting. This helps mentally. Never refer to phantoms as ‘pain’ they are just phantoms (never pain) they can be stabbing, but not stabbing ‘pain’ etc. They are not real at all, ever. Remember to own your stump and don’t let your stump own you. Don’t dwell on phantoms. If you are doing something, let the phantom pass with minimal fuss and continue your activity. You have 6 months from surgery, if you start to see an improvement in this time, the odds are it will continue to improve. The longer it goes on past this the less chance you have to get rid of it.  Hope this helps

Never taken pain meds not even after surgery, when i get phantoms i push my non-toes down hold for count of ten relax and repeat. Then i tighten my knee and thigh and pull the non-toes up that one is a little harder to do. But most times i tend to ignore them

hold your stump in one hand put your other hand on top of your head it does help , Also I’ve got a farablock it’s like a grey cotton stump sock that’s got electrodes in it that’s brill , Many years ago they had a trial in Rookwood limb centre only15 people could try them and thank god as my phantom pain was chronic I was one of the lucky ones that sister Deacy picked for the trial thank god I also take amitriptyline and Tegretol slow release to relieve the phantom pain

Mirror therapy twice a day for 20 minutes each time. Took about 4 weeks to start working but once it did I haven’t looked back. I’ve been off all meds since around 6 months post op and can’t recommend it enough, but you need to commit to it and stick at it.  For me it’s worked amazingly, it’s not a quick fix but it’s worth the effort you put in.

An ice pack on my stump works most of the time for me!

I tend to use heat as it works for me, many times I have got into a hot bath to try and get rid of the pains

I alternate ice & heat now. I also initially found the method of shutting my eyes & first rotating the ankle that’s still there in one direction then the other way (I’m lbk) followed by doing the same on the amputated side, trying to rotate the ankle that wasn’t there. It felt very strange at first but the pain turned to a slight tingle as the signals to the brain were tricked.  Hope that helps.

For the first month or so after my amputation (LBKA) I had this awful crampy feeling in my ‘toes’. They felt as if they were being crushed underneath my foot, as if they were in a shoe that was much too small, it really was awful. I watched some YouTube videos on mirror therapy and thought I had nothing to lose (I can’t take strong pain meds as I’m allergic to morphine and just don’t react well to medication in general). My husband bought me a cheap rectangular mirror and I did mirror therapy twice a day for at least 20 minutes each time and after about 4 weeks I started to feel as if I could uncurl my toes. Now when I get occasional phantom pain that’s bad, a couple of sessions with the mirror usually sorts it out. I’m off all meds’ and get phantom sensation most of the time but it doesn’t really bother me. I get phantom pains and crampy feeling usually when I’m tired but I wouldn’t say they were bad.

I often recommend mirror therapy to people I meet at my limb centre as phantom pain seems to be a problem for a lot of amputees and many people I mention it to say that yeah, they tried it a few times and it didn’t work. I think for it to work you have to commit to it and really stick at it. For me, it was definitely worth it in the end and I really thought it was doing nothing at all for ages.

I get Crampy feeling in My Arm end, don’t give me all that “it’s not the same as a Leg”…..but if it’s not being used 100% You expect it…it’s the new Status Quo (no not the Band ! 🙂 ) If (in a previous existence) You sat with Your legs crossed for a long period of Time – You’d get cramp. Like Julie Francis said Mirror Therapy helps. …..LOADS of stretching exercises – the Tendons and Ligaments shrink with Lack of Use. Think how Cats and Babies stretch themselves…it’s that easy. Be positive and don’t see ‘Physio’ as a chore, integrate it with Your normal routine – whilst the kettle boils or something. Understand that it will never feel exactly the same as the ‘other one’ because it never will, it’s not Built the same any more 🙂 but as You recognise the new ‘feeling’ that it now the Norm then You know that anything on top of that might be worth keeping an eye on mentioning to someone. It isn’t all Doom and Gloom.