A local charity that supports amputees and their families has launched a children’s book which aims to educate young people on disability.

The book – A Day Out with Speedy – is the first in a series created by Steel Bones, which explores real life scenarios in a simple way, aimed to engage with four to six-year-olds.

The charity was founded by Leigh and Emma Joy-Staines who have supplied the first story based on their own experience of taking a wheelchair to a theme park.

Leigh said: “The idea behind the books came from my son when he first started school.

Leigh said: “Teddy said that his friends kept asking questions – why was my leg missing? Did he have to push my wheelchair? Did this mean his daddy wasn’t strong or capable?

“Children are inquisitive by nature and their questions deserve answering. Limb loss is not something that should be scary to children or confusing. The books are designed to fill a gap in the market – there are no children’s books which focus on amputation and yet so many families in the UK are affected.”

The launch took place at Milton Road Library in Cambridgeshire and welcomed a host of guests including amputee families and friends of the charity. 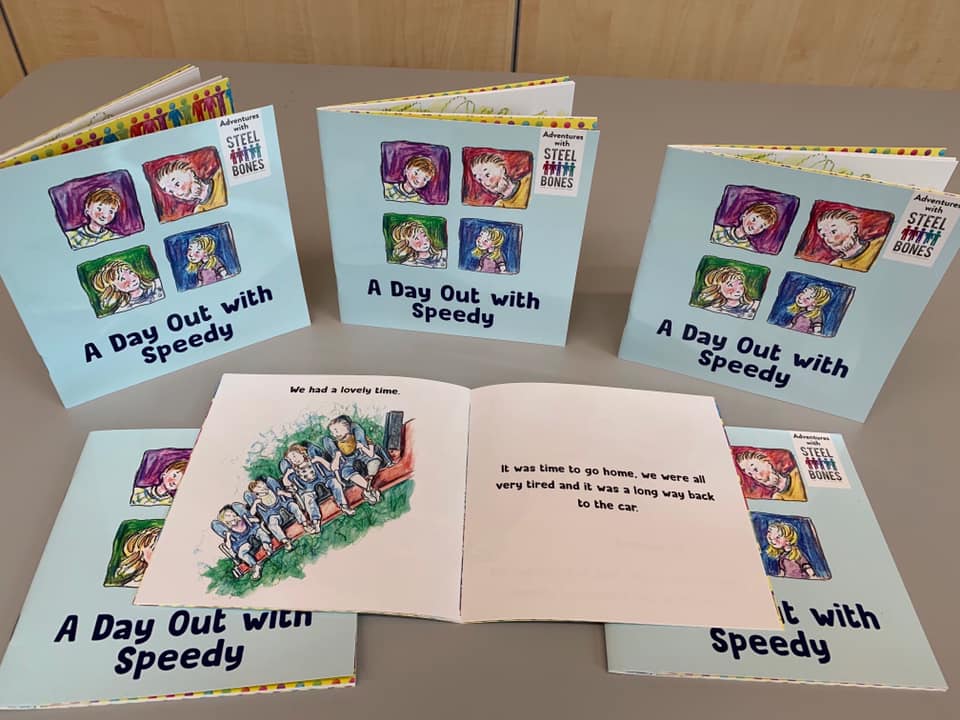 Leigh had his leg amputated at 25 after a series of operations to treat club foot, a deformity of the feet that causes them to point down and inwards.

Leigh’s amputation followed an unsuccessful operation which saw the last remaining artery to his foot severed.

Following his discharge from hospital, Leigh found it extremely difficult to come to terms with what had happened and how to move forward. Both Leigh and Emma struggled to find support groups following the procedure.

Leigh said: “I had been given no information. There was no offer of support. There was absolutely nobody to turn to for advice. And despite the love and care of my girlfriend Emma, I felt utterly alone.”

Leigh decided to create a support network for people like him.

“Emma and I decided to form a Facebook group called Steel Bones – a play on words to demonstrate how strong we could be together,” he said. “We were hoping to meet a few friends and create a forum to have a conversation.”

The group snowballed however and there was a wholecommunity of people across the UK who felt the same way as Leigh and Emma.

“We arranged a bit of a get-together and 60 people travelled from across the country to meet. And just like that, we had an enormous extended family. A network of people who had all felt alone and now no longer were.”

It was many of these members of the Steel Bones community that attended this week’s launch event for A Day Out with Speedy, including ambassador Alice Mason, who is on the development squad for the Paralympics.

The event started with a breakfast reception before moving into a presentation by Leigh and Emma on why they started Steel Bones and the journey they have had so far.

There was also a reading of the new book by Leigh and Emma’s children, Teddy (X) and Sally (X).

Following the event, attendee and charity supporter Deputy Lieutenant, Ms. Lily Bacon said:
“This event was an incredible display of the strength and commitment from Leigh and Emma. To find the inspiration to create Steel Bones in the face of disaster is not only courageous, but also absolutely remarkable.

“A Day Out with Speedy is a fantastic way of helping children understand what those with disabilities have to go through every day.

“I’m looking forward to seeing what Steel Bones do next.”

A Day Out with Speedy is available on the online shop, and is hoped it will be supplied in libraries, hospitals and schools to ensure that it reaches as many children as possible.

The launch of the book took place on 24th October at Milton Road Library, Cambridgeshire.