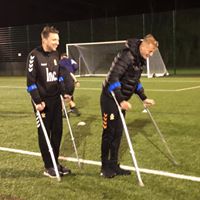 Last Thursday our football session were joined by two special guests Mark Bonner who had only been promoted to Manager a few days before and central defender Harry Darling from Cambridge United Football Club.

Mark and Harry were very keen to try amputee football and both used crutches with one leg tied up throughout the whole session.

By the end of the session I think both were feeling the effect of using crutches with aching hands and upper bodies. A massive thank you to Mark and Harry for joining us and we hope you both enjoyed learning about amputee football.

We are still looking for more amputees to join our session, so why not come down and see what its all about. We are very friendly, you can do as much or as little as you like, or just come along for a chat with other amputees we don’t mind. The sessions are at Bottisham Sports Centre on the 3g pitch Thursday evening 20.00 – 21.00 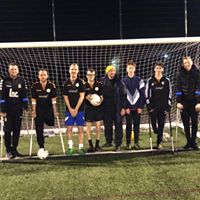